The History and Evolution of Bulletproof Glass 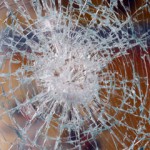 Prince Rupert of the Rhine is usually credited with the first discovery of tempered glass in approximately 1660 A.D. The aptly named Prince Rupert’s Drops consist of drops of molten glass dropped into a bucket of cool water. The ensuing teardrop-shaped objects could easily withstand a severe impact to the rounded end but would shatter upon even the slightest blow to the tail end. The unusual properties of these glass objects led to further research:

The development of tempered glass was an important stepping stone toward the invention of bulletproof glass for high-impact needs.

Also referred to as safety glass, laminated glass was first discovered by a French chemist in 1903. Edouard Benedictus was working in the laboratory setting when he accidentally dropped a beaker that had previously contained liquid nitrate solution. The solution had created a layer of plastic that prevented the glass beaker from shattering; instead, it cracked in several spots without breaking. Benedictus patented his discovery in France in 1909 and in the United States in 1914. Laminated safety glass was used in World War I to construct windshields for airplanes, aviation glasses and coverings for the eyeholes in gas masks. By 1920, laminated glass was being used in the banking industry to provide an added level of protection between bank tellers and their customers.

While the early versions of laminated safety glass could more accurately be described as bullet resistant rather than bulletproof, the advent of World War II led to the development of thicker and more durable versions of bulletproof glass that were installed in trucks and transportation vehicles for use on the battlefield. In 1942, Franklin D. Roosevelt even had bulletproof glass installed in the Oval Office to provide added protection for himself and his aides during the war effort. One of the most famous uses of bulletproof glass began in 1981 when the vehicle of Pope John Paul II was outfitted with this protective material; the move was prompted by an assassination attempt that occurred in May of that year. The first patent for bulletproof glass was granted on March 30, 1982.

The laminated glass used for Houston windshield replacement is closely related to some varieties of bulletproof glass currently on the market. Polycarbonate layers are designed to provide real protection against blunt force attacks and bullets. Glass-clad polycarbonate products combine layers of glass with adhesive polycarbonate to provide superior resistance to bullets and severe impacts. Thick sheets of acrylic are also used to provide bulletproof protection in high-traffic areas.

At Apple Glass Company, we offer a full line of Houston windshield repair and auto glass services. Our highly skilled technicians can also provide you with expert glass solutions that include frameless shower enclosures, mirror repairs, glass replacement and installation of commercial glass systems. Visit us at one of our two brick-and-mortar locations or give us a call at 713-680-1400 in Houston or 281-296-0600 in The Woodlands. The Apple Glass Company is here to serve all your commercial, residential and automotive glass needs.